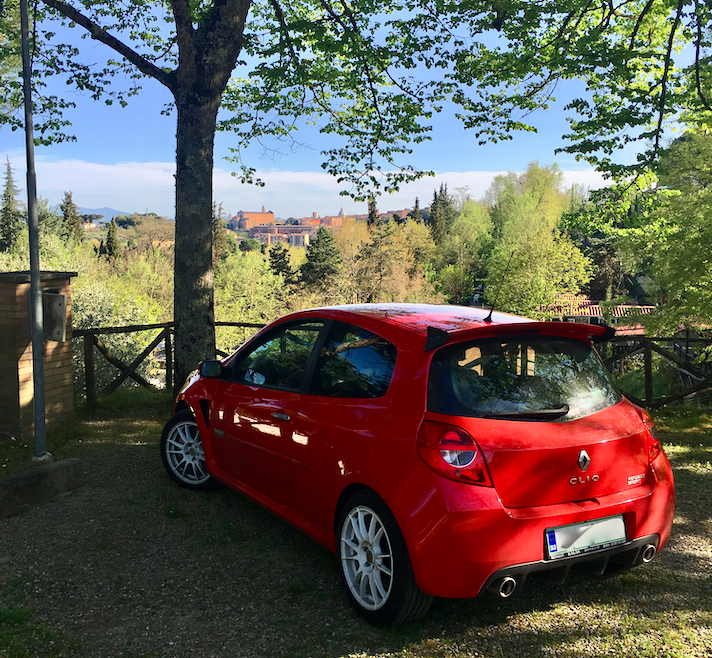 Renault Clio 3 RS is now 14 years old and as a former owner of this toy, I can assure you this is the most fun car for the money right now. You can easily find a 2005-2008 197 horsepower version for as little as 5000 euros. This honestly blows my mind. Here is why.

The engine of this FWD car followed the same recipe as its predecessor. They kept the engine naturally aspirated but increased the horsepower to 197 and 200 in the later models. Both of the versions were 2.0 liter. The sound this engine produced with the stock exhaust system was raw and amazing. It is even better with the OEM Akrapovic exhaust systems that were mounted on some of the post-2008 models. The designers and engineers drew its technology from Formula One and fitted the car with a huge rear diffuser and side brake cooling vents. The braking system was provided by Brembo. Huge red brake calipers made sure everyone knew you had Brembos.

Even though the car was heavier than the Clio 2 RS 182 it was faster due to more power, better torque delivery, and a new six-speed manual transmission. It reaches 0-60mph in 6.5 seconds. This might not sound like much but the handling through tight corners makes up for it, trust me. The 2008, 200 hp version came with a new front splitter and slightly increased power output. They also made some adjustments to the exhaust system, valve timing, and the ECU. They made the first three gears a bit shorter which resulted in a more explosive acceleration. The 0-60 figures remained the same.

Renault also offered the stiffer more track-ready CUP chassis and bucket Recaro sport seats. If you had both of these options, the car was really uncomfortable for daily driving but was a true weapon on a track or a twisted back road. The car had three different back wing options and many color variants ranging from matt silver to alien green. Overall the car looks wide and mean but the one thing that really sets it apart from the flood of Renault Clio’s on the European roads was the huge rear diffuser and double exhaust pipes.

As I said, the car was an instant success with the motoring enthusiasts. Some of the biggest automotive magazines thought the same. EVO magazine labeled it the best hot hatch of 2009. They even said it was fully capable of chasing down supercars on the Evo Car of The Year event of 2009 landing it amongst the 5 best EVO cars of 2009. CAR magazine named it the 911 GT3 of hot hatches due to its N/A engine and crazy good handling. The Clio RS 197/200 remains one of the best hot hatches today in their opinion.

Having owned the Renault Clio RS 3 197 I have to say this was my favorite car by far. Sure it is not the fastest car out there but the one thing it does best is the feeling you get when driving it. It feels small and nimble, it sounds absolutely astonishing and most of all it is reliable and simple. Something which is very under-appreciated in my opinion.

In my 3 years of ownership, I had 0 problems other than regular maintenance and my RS was already 10 years old at the time. I did not “baby” it, I’ve put it through its paces on many tough mountain overpasses and twisty European roads and it never let me down. All it did was bring joy and pleasure. It felt great not having to worry about complicated electronics, turbos, and all other non-sense. The whole thing is built on the premise of simplicity and this is why I think the Clio RS 3 was such a success. It’s good at being a fast fun car, nothing more.

The one thing nobody told me but its actually to be expected is the highway usability of this car, trust me, it’s not good. I once drove it from my hometown to Florence, Italy which is about a 600km journey and my ears were ringing for the next few days. I had the Akrapovic exhaust mounted which makes the car properly loud, especially at higher speeds. This makes speeds above 110 km/h (70mph) truly unpleasant. Also, expect high petrol consumption when driving anywhere above the 110 km/h mark. That is one more reason this car isn’t highway friendly. Do not expect to travel in comfort either, especially with the CUP chassis and Recaro seats. I eventually sold my RS because of my daily work commute which was not suited for the Clio.

One weak spot of the Clio RS 197 is their transmission. The issue is with the 3rd and 4th gear synchros which were prone to failure even at low mileage. This happened even more often if the car was driven on the track or experienced really hard shifting. The gearbox rebuild costs anywhere from 800-1500 euros. This is the only major mechanical issue with the 197. Renault recognized and fixed the problem in 2008 with the release of the Clio 3 RS 200.

You can read more about the Clio 3 RS gearbox problems here and in other threads of the 197 forum: https://clio197.net/threads/new-member-gearbox-issues-flabbergasted.10404/

If you are in the market for a small, cheap to buy and maintain sports car this little hot hatch is a perfect choice. My experience with the 197 was great and I can’t recommend this car enough. You will appreciate it even more if you prefer naturally aspirated engines. The power this car puts out is hiding above the 5000 RPM mark and it demands you drive it high in RPMs. The thrill of always being in high RPM and pulling out of a corner with the engine absolutely screaming is remarkable. All of this for under 10 000 euros, a no brainer if you ask me.